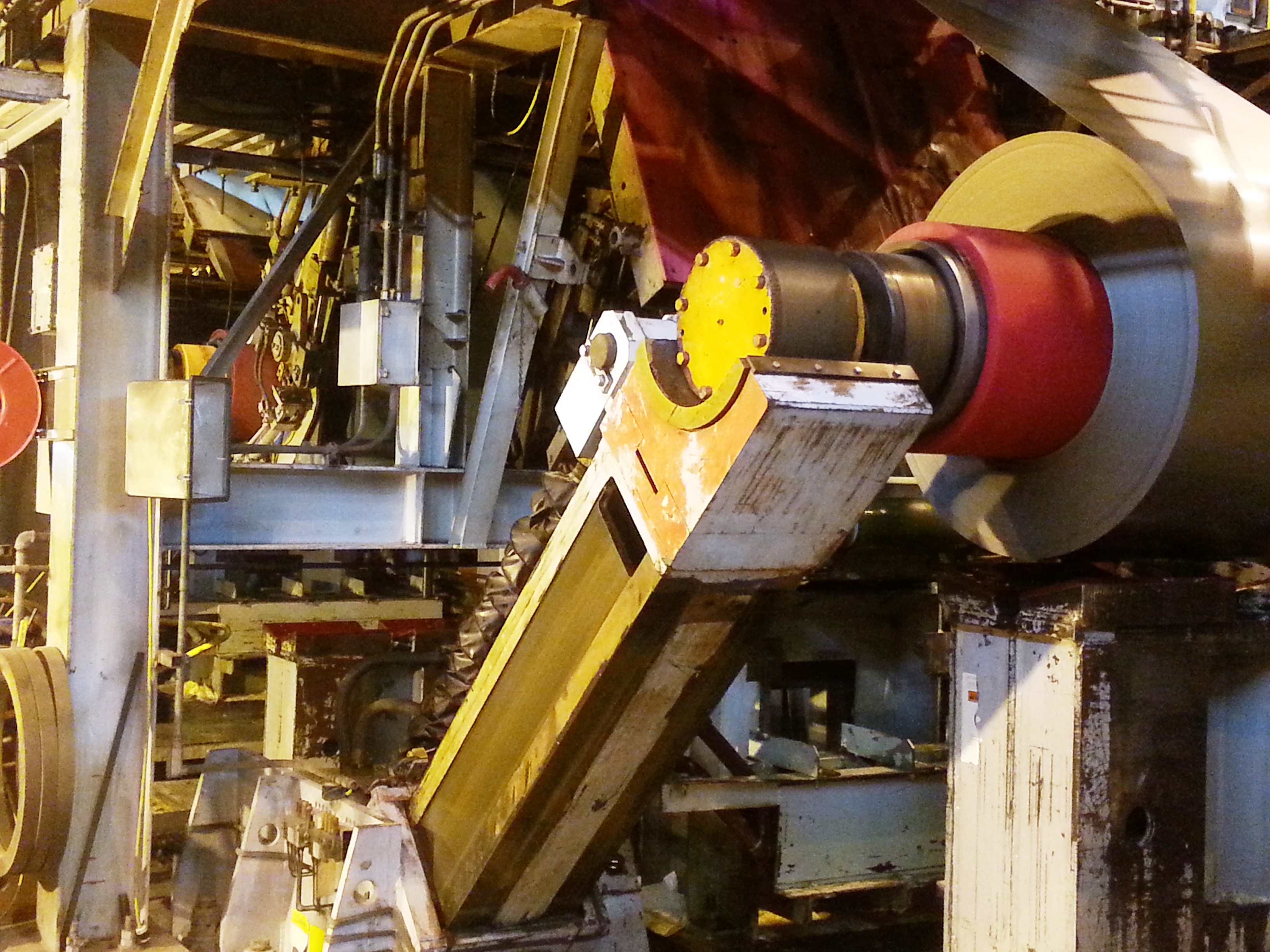 In February of 2007 Kastalon was called to a Steel Mill for interest in our mandrel sleeves. We were called because this particular customer was having issues with the rewinding of their steel coils, as a result of the mandrel sleeves that were being used. They had also tried a few different mandrel sleeves from different vendors without the satisfaction they were looking for. Along with the operating issues, they were just not experiencing a longevity that they felt was adequate.

This particular line was a high speed steel processing line that converted hot band to automotive/appliance grade steel. The area of concern was at the end of the line where they have two rewind mandrels, that they alternate rewinding their finish product with. Most of their steel is considered exposed steel and they guarantee to their customers, 100 % coil usage.

Kastalon met with this customer and discussed their needs and concerns for this particular problem. We obtained drawings of their steel mandrel and engineered a mandrel sleeve that we felt would meet and exceed all of their expectations. In March of 2007, this customer placed an order for one mandrel sleeve for trial. The sleeve worked right out of the box and they ran it for three months, not experiencing any of the issues they had experienced with the prior sleeves. In July of 2007, they placed an order for the second sleeve and outfitted both of their mandrels with Kastalon Mandrel sleeves. They continued to see no reoccurring issues seen from the prior sleeves so they purchased two more sleeves as spares in November of 2007and continue to run problem free. Soon after the two spare sleeves were delivered to the customer, I stopped out and met with the customer to offer them with some tips on how to store and add operating life to all four of their mandrel sleeves. Tips that were never offered to them from previous suppliers.

In June of 2009 an order was received at Kastalon, Inc. for one sleeve. We called the customer to check in and we were told that they had an operator error and that one of the sleeves was tore and that they had to take it out of use. We asked them why they didn’t call us out to take a look at the sleeve before that was determined. They responded that the operator admitted to his error. And that the sleeves were just inspected a few weeks prior and looked as good as new, other that being oily from use. In November of 2011, two more sleeves were ordered. The customer was concerned that they have never had Mandrel Sleeve last this long and wanted to add two more to their inventory in case of a sleeve failure.

Since March of 2007, Kastalon has supplied a total of seven Mandrel Sleeves to this particular line. As of April of 2012, three of the four original sleeves provided by Kastalon are still in use. Remember, one was taken out of use due to operator error. This particular line is considered a High Speed, High Tension, Dual Rewind line. This customer has averaged 1,125,000 tons of steel per year that has been recoiled on our sleeves at an average speed of 1800 feet per minute. Their steel is considered very high quality steel which also adds something to say about our sleeves. (If our sleeves had poor cut resistant properties, we could also create them quality issues with their thinner gauge steel. But they have not experienced any of that.) Our customer has worked with us and together we engineered a sleeve that would meet and exceed their expectations. To say that they are satisfied with Kastalon Mandrel Sleeves is an understatement.

Update: 8/1/14
This customer placed an order for two more Mandrel Sleeves in July of 2014. Two of the original sleeves from 2007 finally wore out. That brings the total amount of sleeves ordered to 9 since 2007. Six of the sleeves are still in working order and are in their rotation being swapped out during downturns every three months.

Total cost of the nine sleeves that have rewound 9,000,000 tons of steel since 2007 have produced an operating cost for Kastalon’s Mandrel sleeves of $0.07 per thousand tons.